Donald Dinnie, the son of a stonemason, won his first sporting event, at the age of 16, in the nearby village of Kincardine O’Neil. He defeated the local wrestling strongman David Forbes, and took first place which included £1 prize money. In 1860, Dinnie undertook a feat of strength that was to give birth to a long-lasting legacy. He carried two boulders, with a combined weight of 775 pounds (352 kg), for a distance of about 5 yards (4.6 m), across the Potarch Bridge and back. Each boulder had an iron ring fixed to it, so that scaffolds could be attached from which workmen could repair the bridge, over the River Dee near Kincardine O’Neil. The original stones are now located outside the 18th-century Potarch Hotel, on the south bank of the river by the Potarch Bridge.

As time passed, Dinnie became an all-round athlete, growing and building his skills over a 20-year reign as Scottish champion (1856–1876). He excelled in sprint, hurdles, long and high jump, pole vault, putting the stone, hammer throw, tossing the caber and wrestling. The BBC website says “Comparing his best performances long before the Athens Olympics of 1896 leads one to imagine him capable of winning seven gold, a silver, and a bronze medal”. However, by 1896, Dinnie was approaching the twilight of his sporting career.

Dinnie was a 19th-century superstar, with widespread fame, success, and riches. Dinnie held the title “World Champion Wrestler”, and was regarded as the “greatest athlete in the world”,[4] and “The Strong Man of the Age” He was so well known that “heavy artillery shells in the First World War were nicknamed ‘Donald Dinnies.'”This man brought fear into the United States. Not only did he intimidate the American strongmen, but in addition he also captured most of the world’s attention as well. His documented achievements worldwide consist of “2,000 hammer throwing contests, over 2,000 wrestling matches, 200 weightlifting contests, and about 500 running and hurdle events. He also made a good living at all this, earning at least £25,000 in his career, a sum that would be worth about US $2.5 million today. And to this day his image continues to endorse commercial products in Scotland.”

Donald Dinnie displaying some of his medals

As Scotland’s greatest athlete, Dinnie competed in sixteen Highland Games seasons in his native land. He first toured the United States’ Caledonian Circuit in 1870. In that year he earned a fortune. Dinnie, then thirty-three, was titled “The Nineteenth Century’s Greatest Athlete”. However, others despised and criticized Dinnie for his incredible strength. He continued to tour, and in his 60th year he was in New Zealand and Australia as a successful professional athlete.

Donald continued to be involved in theatres and at Highland Games as a judge, or in veteran events, until 1912. In 1903 Robert Barr invited him to endorse his soft drink Iron Brew, using Donald’s image on the label with Donald proclaiming “I can recommend BARR’s IRN BRU to all who wish to aspire to athletic fame, signed Donald Dinnie, All-round Champion Athlete of the World.” Later in Donald’s life he struggled financially, and in his 70’s was still performing as a strongman in London. His act was to support a platform made from a large table while two Highlanders danced a “fling” on it. Eventually London authorities terminated his performing licence because of his advanced age. To help with his situation, a benefit concert was organised which provided Dinnie with a small annuity.

Donald and his family lived in Glasgow, where they owned a fish and chip restaurant and tea-room in the Govan area. They then lived for 2–3 years in Newcastle, before finally settling in London where Dinnie died in 1916, aged 78 years. In the United States, The New York Times paid tribute in the paper’s obituary column.

In 2002, Donald Dinnie was inducted into the Scottish Sports Hall of Fame in Edinburgh. Donald’s relative Gordon Dinnie accepted a cut glass trophy on Donald’s behalf. Gordon Dinnie also still owns an original astrakhan breastplate that carries 19 medals won by Donald Dinnie from 1860 to 1896. A 23 inches (58 cm) carved statuette of Donald Dinnie, engraved with the words “Presented to Donald Dinnie, Champion Athlete In Appreciation of his Athletic Prowess, by his Scotch Friends, In Newcastle 1870”, is in the Aberdeen Art Gallery along with many of Dinnie’s medals. 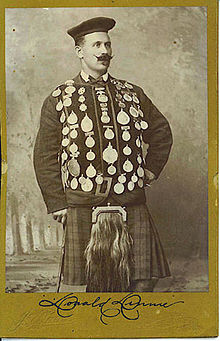 Since it's formation in July 2000, the Irish Strength Association have gone from strength to strength, boasting over 140 members, many of whom have competed in the highest levels of Strongest Man,Arm-wrestling and Highland games competitions. Mission: To be the strongest on the planet!

Mar 19, 2022
BE SURE TO WATCH LAST YEAR’S FINAL TODAY ON RTE 2 AT 4.30PM OR PICK IT UP ON RTE i-PLAYER FOR THE VERY BEST OF IRISHULTIMATE STRONGMAN ACTION! www.ultimatestrongman.tv TICKETS NOW ON SALE to be part of Ireland’s Strongest Man 2022. The biggest, the best and the strongest men in Ireland will battle over 5

Oct 28, 2021
The Gorilla Glue UK’s Strongest Women 2021 was overall a great success in it’s first year. We were delighted to have a blue-chip sponsor onboard to support the event with Gorilla Glue Company. We also got fantastic TV support with 2 hours from RTE2 and 2 hours Showcase TV and Sporty Stuff HD on SKY.

Oct 8, 2021
Gavin Bilton becomes the first man to win consecutive UK’s Strongest Man titles after greatest like Glenn Ross and Eddie Hall. After 3 days of competition it was the Welsh Bull who carried out his game plan to defending his crown. Throughout the quarter finals and semi finals Gavin was tactical conserving energy for the

Aug 19, 2021
On Sunday 15th August in Bangor Co.Down was the grand final of Ireland’s Strongest Man 2021.  16 of the strongest men were gathered who earned their place from a qualifier prior to the contest.  Unfortunately, the defending champion Matthew McCoy was unable to attend due to an illness.  However, this was still an incredible line

Jul 26, 2021
The contest found the remainder of the All Ireland Finalists to make a 16 man line up joining the likes of Matthew McCoy, Ivan Gannon, Pa O’Dwyer, Matthew McKeegan and Peter Bremmer to see who will win this historic crown.  This contest also was for Republic of Ireland, Ulster, 95KG, & 110KG and Novice/Junior/Master Strongest

If you would like to get book an event please click here to message us directly or use any of the methods below.